Self-soothing can be a grim bit of business these days. We’re wearing our soft pants, baking banana bread, turning off those devices at 9:00 and writing letters to swing-state voters and watering our houseplants because goddamnit we are going to be okay. Our inner landscapes bear the deep furrows of our fingernails as we do our best to hang on—and yet we do hang on, we hang in there, with whatever it takes.

Lately I find myself pinging between desires that belong to a much older person—lavender sachets, Crocs, a life where I will never again have to drive at night—and things that would have made my preadolescent self happy: rainbow assortments of markers, stickers, Pop-Tarts. I am simultaneously 75 and 12. Whether it’s a function of age, exhaustion, a dark lack of justice in the world, or the sharp uptick in my personal losses doesn’t matter. And I think I’m not the only one. Many of us have been in need of consolation for a while now—and little wonder.

A quick Google of “comfort reading” turns up plenty of contemporary writers recommending good, solidly literary stuff—Pema Chodron, Rainer Maria Rilke, Middlemarch. But I would also put good money on a silent cohort of us who dragged out our kids’ battered copy of Dr. Seuss’s Sleep Book in mid-March or so for a regular reread, or Pippi Longstocking, or anything that speaks of a world built on a simpler equation.

Even before the pandemic, Charlie Mackesy’s The Boy, the Mole, the Fox and the Horse struck a nerve. Published in the UK by Ebury Press and the U.S. by HarperOne in fall 2019, it was hailed by reviewers as a “surprise hit” over and over—which should have surprised no one. In an England roiled by Brexit, and a United States battered by Trump, the slim graphic novel has all the right ingredients for a public hungry for a little compassion.

With spare, gestural pen-and-ink and watercolor illustrations and short handwritten epigrams, Mackesy tells the story of a young boy out walking who encounters first a cheerful mole, then a wary fox, and finally a calm protector of a horse. They talk about life, its challenges and pleasures, in short declarative bursts while ambling through a minimal wintry landscape—and that’s it. 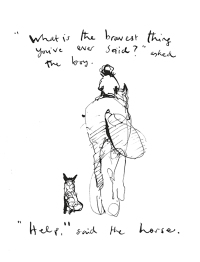 The drawings are lovely, full of mystery and movement—Mackesy, a cartoonist for The Spectator and illustrator for Oxford University Press, first came to the attention of Ebury editors through his hugely popular Instagram account. The book’s text is either koan-like or banal, depending on the reader and their level of receptivity, and much of its charm comes from Mackesy’s unpretentious brushwork calligraphy:

“What is the bravest thing you’ve ever said?” asked the boy.
“Help,” said the horse.

But whether you find it expressive of gentle universal truths or Hallmark-trite, the book’s message—of vulnerability, asking for what one needs, and looking to friends for support—hit home for a great many readers; it was named Barnes & Noble’s and British retailer Waterstone’s 2019 book of the year, and by the beginning of 2020 had sold more than 250,000 copies in the United States. The Boy, the Mole, the Fox, and the Horse been compared to Winnie-the-Pooh, The Little Prince, even Jonathan Livingston Seagull. A glance at Amazon or Goodreads confirms that this small book, published almost serendipitously when Mackesy was in his mid-50s, with a long career as an artist under his belt, has touched an awful lot of people in these difficult times.

Bloom briefly caught up with Mackesy in May to find out a bit more about what makes his book tick.

Lisa Peet: First the basics: Did you always draw? What kind of books did you like as a kid, and what do you like now as an adult?

Charlie Mackesy: I’ve always drawn. My earliest memories are of drawing and drawing horses when I was about four or five years old. There’s a book that influenced me the most called Tim All Alone, that was written and illustrated by the same man—Edward Ardizzone. He took me into another world through his work and his drawings, and I’ve always kind of wanted to do that myself but didn’t really think I could. Well not until now.

LP: I know you grew up among animals, but did you also have imaginary animal friends? (Asking because I did, and the book vividly reminds me of them 50-odd years later.)

CM: Yes, I had an imaginary kestrel. I went to an awful, hideous, depressing boarding school and so I would pretend to see the kestrel. I also imagined feeding my dog.

LP: Can you talk a bit about the book’s genesis? I know you’ve mentioned that some of the incentive to put it together came through your interaction with fans on social media—how do you make platforms like Instagram or Facebook work for you rather than being a drain on your energy?

CM: The aim is to enjoy them, not let it control you, to not perform, to not try to impress, to be really honest. To post when you want to and not when you feel you should. The key for me was really loving engaging with people—I’ve had a few bad experiences lately, but I’ll always be grateful toward the kind people encouraging me to carry on. To me it’s been priceless.

LP: The characters are clearly familiar friends of yours. How long have you been living with them, and how did they come to be?

CM: Tough question to answer. The animal characters have been shaped by different animals and people I’ve known. They’re an amalgamation of those who have been with me all my life in different form—I recognize myself and others in the characters in different ways.

A friend of mine when I was younger was like the fox. He was really damaged and quite quiet, but just liked hanging out with me. They’re all hybrids.

LP: I love the hand lettering—the book wouldn’t be the same without it. About how many takes do you need to get the lettering to where you like it?

CM: It varies on the day. Some days—as with everyone—things come together, and then on other days it’s exasperating. I’ve thrown many drawings in the bin when they refuse to cooperate. It’s a hard one to answer.

LP: What is the music on the endpapers?

CM: I collect music scores, and have mountains of them that are anything by anyone—as long as they’re over 100 years old I love them. People have looked for meaning in the endpapers but there isn’t any. I just happened to draw on a score—I think it’s Schubert, which is fortunate because I like him.

LP: The book is deeply spiritual without mentioning God. I know you’re a Christian, and the messages also remind me of those found in Buddhism, or directives for meditation. Did you ever consider writing the book as an explicitly spiritual text?

CM: No, I think the word spiritual annoys me. Everyone is spiritual. It’s not a religious book, the book is about sharing our humanity and weakness. To be truly spiritual is to be truly human.

LP: Your work—while wonderfully evocative of gestures—also has a very palpable weight, and you can often feel the bodies touching, particularly for the boy and the horse. I see it in your other artwork as well, and know it’s not a simple thing to portray in two dimensions. Is that sense of touch and weight something you’ve always been able to translate to paper, or is it something you’ve worked out over time?

CM: I don’t think I’ve ever tried to work out anything—I think I draw instinctively, then I look back. I draw from the gut. It’s an emotional response, rather than an objective one. I get a feeling if something has worked or not.

LP: Do you have any thoughts on what makes that hand-eye-emotion connection so restorative/cathartic?

CM: I think the process of allowing your hand and heart to make marks without thinking too hard is always going to be therapeutic. Expressing yourself, talking to someone honestly. Letting something out that’s in you. The process of expression is very important to humans—it really matters that what we feel inside has a voice. It could be drawing, it could be writing, it could be anything. Drawing is good, as long as you aren’t hating on yourself for not being good. Being such a critic of yourself, it’s not enjoyable. If you’re trying too much to please people, you’ll suffer.

LP: Have you been isolating because of COVID-19? How has it been for you? Has this experience found its way into your work (which already addresses a strong need for connection and kindness)?

CM: Yes, for seven weeks, because of COVID-19, I haven’t left the house except to go into the garden.

Because of what I’ve been doing online, I’ve found a way of communicating with the people I’ve wanted to thank. Doctors, nurses, teachers. NHS hospitals have used my drawings on their screensavers, nurses have pinned them to walls in hospitals. To me it is a great privilege. So I’ve had a good experience during this time, in a way I never imagined.

LP: What are you reading right now?

CM: I’m reading Animal Farm by George Orwell. Never read it. I meant to have read it at school, so now I am.

Lisa Peet is the News Editor at Library Journal and a card-carrying bloomer herself.