“Go Figure” is a new regular feature at Bloom that highlights and celebrates the interdependence and integration of math and literature, and that will “chip away at the cult of youth that surrounds mathematical and scientific thinking.”  Read the inaugural feature here.

I have two sources of information about Russian mathematician Sophia Kovalevsky: her Wikipedia page and Alice Munro’s short story, “Too Much Happiness.” I planned it this way. I wanted to use the juxtaposition of the real Sophia Kovalevsky with the fictional one to explore set theory—the mathematical study of groups of objects and how they intersect.

The Venn diagram represents a simple and familiar type of set theory:

This image shows how the Greek, Latin, and Russian alphabets intersect by which letter glyphs they have in common. This diagram doesn’t lend any insight into how these three languages are related to each other on a more complex, linguistic level, however; it simply gives a snapshot of the building blocks they share. The intersection is useful information, but it doesn’t tell the whole story, neither about the set nor the shared members. In some cases, intersection reinforces identity – a seven is a seven whether it is a member of the set of odd numbers or the set of prime numbers. But things get much trickier when trying to equate shared members that are facts or fictions about a person’s life.

Munro’s “Too Much Happiness” is partly biographical, based on the days leading up to Russian mathematician Sophia Kovalevsky’s death, with a few flashbacks into her past. Munro acknowledges in the back of the book her research into Kovalevsky’s life, and encourages readers to learn more from Little Sparrow, a biography of Kovalevsky by Don and Nina Kennedy. I did not follow Munro’s advice—not for lack of interest, but to limit my comparison to two distinctly defined, if flawed and incomplete, sets of information.

I built my two sets by starting with their shared elements:

There were many other shared components that I simply couldn’t cram into the graphic: a daughter nicknamed Fufa, a revolutionary sister who married a feckless Frenchman, and other details that made the fictional Sophia Kovalevsky hove very closely to the real one. There were also questions that arose in Munro’s story, like why the name Sophia suddenly changed to Sonya in some parts of the narrative, that were easily explained in the Wikipedia entry: Kovalevsky referred to herself as Sonya when she moved to Sweden.

However, when I began to identify members specific only to each set, there was one stark difference: in the Wikipedia set, Kovalevsky maintained a close friendship and was even romantically linked to actress and playwright Anne Charlotte Edgren-Leffler, whom she collaborated with on a play; while in Munro’s set, she was madly in love with and engaged to marry a distant cousin of her dead husband, Maksim Maksimovich Kovalevsky.

In Munro’s fiction, Kovalevsky’s relationship with Maksim was the organizing principle around which all the other members of the set coalesced, like planets orbiting a dense sun:

“He takes up too much room, on the divan and in one’s mind. It is simply impossible for me, in his presence, to think of anything but him” (p 249).

Did Kovalevsky’s relationship with Anne exhibit a similar gravity? I couldn’t know for sure—the real relationship with Anne was weighted with unverifiable statistical probabilities, odds that it may have been more than a friendship, that it may have been a romance that shaped Sophia Kovalevsky as a writer, which, in turn, influenced her as a mathematician. Truth became stranger than fiction in a problematic way. Where the fiction looked like a nice simple, sun-centered solar system with Maksim in the middle and the details of Sophia’s life orbiting fixedly, the truth became a dizzying whirlwind of geocentric, Ptolemaic epicycles carving impossible shapes through the ether. 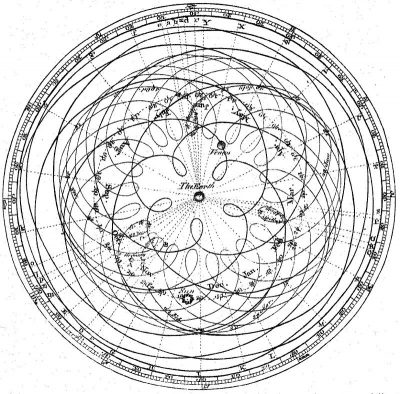 My sets, seemingly so simple at the outset, diverged in ways I didn’t expect. My shared members were no longer shareable – the kind of mathematician or writer or mother Kovalevsky was in real life was not the same as who she is in Munro’s story.

The Munro Set and the Wikipedia Set have inherent characteristics, strengths, and flaws when it comes to using each alone as a source of truth. The Munro Set, by nature of being fiction, contains all the truth it needs in itself – for any story to work, the author creates a big enough world within the narrative to ground the reader in a kind of truth. The fiction is self-contained and self-referential; it can stand alone as a finished version of reality, albeit in a consensually-agreed upon, useful disguise. The Wikipedia Set is never finished and never fully codified – for the reference to work as it was designed, it is constantly added to and subtracted from by various experts and aficionados, tweaking reality toward a consensually-agreed upon actual truth comprising verifiable, historical facts and conjectures that are potentially true, or at least worthy of further conversation. In this way, the fiction, the Munro Set, is more solid and stable, while the reference, the Wikipedia Set, is more volatile and dynamic.

What started as an exercise in arriving at different truths—Munro’s fictional story of Kovalevsky compared with that of the real person—quickly became a meta-adventure in the validity and equivalency of my sets, and the inherent value in comparison of and intersection between them. It was Munro who helped me reframe the conundrum, with the quote she chose to paraphrase from Kovalevsky at the start of her story:

“Many who have never had an opportunity of knowing any more about mathematics confound it with arithmetic, and consider it an arid science. In reality, however, it is a science which requires a great amount of imagination.”

Using a great amount of imagination, mathematicians expanded on set theory in the 1960s, introducing fuzzy sets, which allow members to have a degree of membership, rather than only definitely belonging to the group or not belonging (like the bivalent sets on the left in the image above). Fuzzy set theory analyzes information from more complex sources, like biological systems. The member of one set might share membership with another set, but at a probability or precision of 75% instead of 100%. Looking at the shared elements in the Munro and Wikipedia sets with this natural degree of uncertainty creates a more accurate representation of their membership, and puts truth in its proper place—as a likelihood affected by memory, historical context, observation, and expectation.

After the fictional Sophia dies of pneumonia like the real Sophia, Munro punctuates the story with a fact: “Sophia’s name has been given to a crater on the moon.” This was the one of the few things I knew about Kovalevsky before I read “Too Much Happiness;” I didn’t need to verify it on Wikipedia. But the fiction had changed what I thought about the fact—it was no longer just an honor to ensure her important accomplishments in math and science were remembered, it was also an apt way for Munro to end the fantasy of Kovalevsky’s relationship with Maksim, with Sophia remotely but resolutely still orbiting.

Thanks to Laura Pierson—a senior at Skidmore College double-majoring in math and English— who helped with the development of this installment, and properly admonished me about using Wikipedia as a reference source.

Susan Sechrist is a freelance technical writer who is striving to better integrate her creative and mathematical sides. She is the Interviews Editor at Bloom and published her first short story, the mathematically-themed A Desirable Middle, both in Bloom and the Journal for Humanistic Mathematics.