Poets often mine the same subject matter as memoirists: personal narratives, stories of family and ancestors, the development of a sense of identity. While memoirists tend to follow a chronological order, poets work with this subject matter in other ways. Annie Kim, author of the 2015 Michael Waters Poetry Prize–winning Into the Cyclorama (also a finalist for the Forward INDIES prize), uses as one model the cyclorama of the title—a panoramic storytelling structure invented in 1787 that became wildly popular in the late 19th century. Few remain today, but they can be seen in Moscow, Quebec, Pyongyang, and Cairo, among other places. Visitors to a cyclorama step into a round space with painted outer walls that depict a vista or an event such as a battle. The viewer walks around the edge, letting the story or panorama unfold in a chronological or linear way, or they can stand in the middle, turning here and there, taking in a little at a time (often getting a bit dizzy in the effort). This last is closer to Kim’s method.

I interviewed Kim, a lawyer and assistant dean for public service at the University of Virginia School of Law. She didn’t begin writing poetry until her late twenties, though she says, “I was always scribbling bad plays and stories as a kid.” Then, decades later, “I walked downstairs one night because I couldn’t sleep and ended up writing my first sonnet.” She adds, “It wasn’t good.” Eventually she entered the Warren Wilson low residency MFA program, writing poems and studying poetry while working as a lawyer.

Kim is also a musician. “Like a lot of Asian Americans,” she says, she learned to play the violin and has been playing in orchestras “as an amateur” since. Music is in her bones, she says, and that turns out to be vital for her poetry. “Musical forms give us a skeleton flexible enough to hold together wildly different feelings and ideas,” she says. In “A Rag for My Father,” Kim improvises on the ragtime form to explore a provocative family story. Kim asks “What does it mean to be the daughter of / a man who doesn’t know his father?”  The poem doesn’t answer the question, but instead walks us through a variety of possible beginnings to an answer. Just as Scott Joplin did with his rags, Kim indicates with an annotation, before the poem begins, how to read it: “leisurely, not too fast.”

In “Prelude and Fugue,” Kim writes about how her grandfather vanished when her father was a baby, “weeks / or maybe months after the liberation, / August 1945.” As the title of the poem suggests, it’s divided into two parts. The prelude, subtitled “Ghost,” tells of the disappearance of her grandfather. The second, the fugue, riffs on the etymology of fugue—“From fuga, meaning ardor / or flight, from fugere, to flee”—and describes the grandmother searching for her son’s father. One flight follows another, just as the melody in a fugue follows itself in layers.

Musical forms give Kim a shape in which to contemplate “difficult personal subjects.” Writing about complex or emotionally fraught subject matter is challenging because it feels out of control, she observes; a form—whether a formal poetic structure or one borrowed from another medium—provides boundaries within which to explore difficult material.

Another medium that influences Kim’s poems and provides structure is visual art. “Prelude and Fugue” begins by imagining her grandfather by way of a figure in a famous painting:

He’s the figure in the doorway,
a pair of tall black boots.
He’s the man in the back
of that Velázquez painting, stepping in,
stepping out of the room—
it’s not clear which—backlit,
face dim, bare outline of a hat
dangling soft and black from his hand.

“The Bronze Helmet (A Retrospective)” tells the story of Sohn Kee-chung, the 1936 Gold Medal Winner at the Berlin Olympics, who happened to be a friend of Kim’s great-uncle. Sohn was a Korean who ran as a member of the Japanese delegation. Here we learn Kim’s grandmother is the daughter of a Japanese mother and Korean father, and the complexity of Korean history reveals itself. The narrative of the Olympian becomes an allegory for Korea’s history of Japanese occupation and for the story of Kim’s own family.

This bricolage of weaving various stories together is reflected in Kim’s references to collage art. Kim says that she “was struggling to find a form” for this poem “that would allow [her] to integrate disparate elements of family history, [her] conflicted feelings about Korean culture” and the Olympian Sohn. Using collage, Kim says—“its deliberately jarring juxtapositions, its interest in layering found and historical elements alongside the personal lyric”—made it “a receptive mode.”

Section 5 of “The Bronze Helmet” is entitled “Looking at a Collage by Hannah Höch,” an early 20th century pioneer of the medium.  Kim explains, “I like her distortions of women’s faces and how they suggest a fragmented sense of identity.”

Not the loss of her eyes but these eyes, different sizes, owners,
pupil orientation,

glued to this creamy fin-de-siècle pasture
of a face—lips, cheeks, chin, melodious—

so she can’t see, whatever she we might imagine,
she is composite.

Asked once about her mother,
(she could sit up on the couch, tube
dangling from her nose)

my grandmother looked at me blankly as a cat,
Which one?
I had two. Japanese and Korean.

No background. Whatever may have peopled it
replaced by a clean black matte.

The references to visual medium are reinforced by the way Kim layers perspectives, uses typographical elements, and varies syntactical patterns. And out of this collage we see the speaker, her grandmother, and her great grandmothers, all present in the poem, though in parts—just as the Höch painting in the title depicts a face in parts.

In “Prelude and Fugue,” Kim also expresses the challenge—shared by memoirists—to uncover things that are hidden or unknown, or perhaps even unknowable.  She writes, “I scrape / the peeling paint only to find / more paint,” and in “The Fall, Rehearsed” she points out how, in the process of discovery, we can become “skeptical of the themes / we learned”—that family stories may reveal things different from what we were told.

In an especially vivid and moving poem, “Inside the Great Buddha,” she tells about climbing into the massive head of the monument of the Great Buddha of Kamakura. This is a Buddha that has been “built, rebuilt across the centuries,” just as a family’s history is built and rebuilt. Kim asks, “What did they come for? / To learn that merely being closer, this / animal gesture, still warm from the cave, / gives them nothing new to grasp, being inside / is not inside knowledge?” She could be asking herself this question about her own family and what closer can reveal or not, what inside knowledge might be made available or not. Later, in “Apology to Aristotle” she essentially answers her own question:

You see what happens
when I look. I turn one thing
into another, I invent
my own brand of clarity.

This inventing centers around (pun intended) the cyclorama of the collection’s title. Surprisingly, Kim has never actually visited a cyclorama. But, she says, “A friend who’s into Civil War re-enactments told me about the Gettysburg Cyclorama.” Kim notes that the idea feels somewhat familiar: “The concept struck me—a work of art designed to immerse the viewer inside history, a precursor both to the modern movie theater and the learning museum.” In other words, like her music and the work of collage artists, Kim has found another form in which to “invent” her “own brand of clarity.”

The collection’s central poem, “Cyclorama,” like a collage, is built of many elements. Kim uses quotes from a variety of text sources, including Reuters, CNN, the New York Times, advertisements, and historical documents. It juxtaposes the news of the Sandy Hook school shooting with details about the Gettysburg Cyclorama. Music enters the poem, of course, when Kim mentions Samuel Barber’s great song of grief, the Adagio for Strings. Themes of violence and of civil war, of remembrance and mourning all weave in and out, or hover in the background like ghosts. These are themes of Kim’s own family story, though that story is never mentioned in the poem. But it ends with a key lesson: 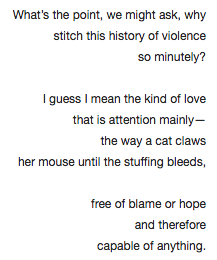 Into the Cyclorama is a tender and probing meditation on family, loss, and grief. Kim calls herself a “grief machine.” And surely this could be said of many of us—in Kim’s words, “creating and recreating structures of grief comes naturally.” By way of explanation, she tells of visiting a retrospective of Alberto Burri, an Italian artist, at the Guggenheim Museum,. “He had a series of huge, tarpy plastic ‘combustions’ that were like canvasses punched through with holes. You could trace the skin of the plastic where it had ripped and stretched and cooled into new craters. I want my poems to show this kind of skin: torn but intact.”

This combination of whole and not-whole is explored in “Drawing the Ensō,” a poem near the end of the collection about a figure of a circle drawn loosely and unclosed, symbolizing, in Zen tradition, openness, togetherness, possibility.

Quickly spreading circle. Bending
over paper, charcoal in my hand.

One stroke, use
the whole body—

I’m trying to forget the shape
I make. Just the pressure and
release as I round the curve,

lift when I reach the point where
I begin. Almost.

Never close the circle. There’s peace
in repetition, mauling the thing I
most want to build, creating it

again and again. Imperfection
is the form I want to take.
Incompletion means I’ll live.

The poem itself is a deep breath, carrying in it Kim’s own notions about writing about family and grief—imperfect, cyclical, a way of making peace—“Almost.”

Athena Kildegaard is the author of four books of poetry, most recently Ventriloquy (2016, Tinderbox Editions). Garrison Keillor has read her poems on “The Writer’s Almanac,” her poems have been set to music by Libby Larsen and others, and they’ve been nominated for the Pushcart Prize. Kildegaard teaches at the University of Minnesota, Morris.  Learn more about Athena here.