Features / Other Bloomers and Shakers

It was the devil’s music. James Lewis Carter Ford’s father said so. Maybe that was why Ford didn’t pick up a guitar until he was nearly 60 years old. 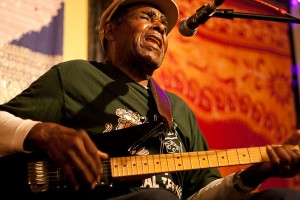 You might know Ford better as blues musician T-Model Ford. Or maybe you didn’t know his name at all. His life was more legend than fact, and maybe that’s what sparked my own fascination. Ford’s blues were the low-down dirty variety, the kind that comes with a shot of whiskey. This illiterate Mississippi man couldn’t remember when he was born—somewhere around 1920, maybe as late as 1925 or as early as 1918. His father was a sharecropper with a violent temperament, and T-Model never attended school. Instead, he worked the fields, plowing behind a mule. In his early teens, he worked in a sawmill, then became a truck driver. Then there was the time he stabbed a man to death in a bar fight and was sentenced to 10 years on a chain gang, of which he only served two. Allegedly married six times, he was rumored to have fathered 26 children. His first wife might have left him for his father.

What is indisputable is that T-Model Ford’s first album wasn’t released until 1997. He was somewhere between 72 and 79. What makes someone start playing the guitar in his fifties after a lifetime of hard labor and prison? What changed? The story goes that his wife at the time bought him an electric guitar—and then left him. “Before then, I didn’t have the blues in me,” he said in a 2000 interview with The Bergen Record.

Regardless of when he got the blues, his reputation as a violent womanizer was almost as legendary as his music. He was called “incorrigible ” and the “friendliest fun-loving psychopath you’ll ever meet.” He referred to his younger self as “a-sure-enough-dangerous man.” He had a way about him during performances:

Ford could be playful on stage, and often interacted with attractive couples in the crowd.

“He’d say, ‘You’d better put your stamp on her because if she flags my train, I’m going to let her ride,'” [longtime friend Roger] Stolle said.

After Ford’s death in 1997 from respiratory failure, writer Patrick Wensink eulogized him in The Weeklings (reprinted in Salon) as “more of an unshaven torch carrier of the blues. T-Model Ford and that filthy mouth were the last direct link we had to the raw, profane blues of the 1920s, Thirties and Forties.” How profane? Wensink points to some of the standards in Ford’s repertoire: “’Please Warm My Weiner,’ ‘Banana in Your Fruit Bowl,’ ‘My Pencil Won’t Write No More,’ among others.” Ford was a pioneer of the blues despite his late blooming career, although perhaps not in a straightforward way, and his obituary writer at The Guardian agreed:

On his subsequent Fat Possum albums You Better Keep Still (1998), She Ain’t None of Your’n (2000) and Bad Man, Ford maintained—one could hardly say developed—his approach, shredding other people’s songs and refashioning them as minimalist chants, underpinned by open-chord guitar and Spam’s joyous drumming. In tracks such as “I’m Insane” or “Junk” he created a wholly individual free-form music, a blues equivalent of outsider art.

Devil’s music or no, T-Model’s blues live on in legend.