Features / Other Bloomers and Shakers

For many years, well into her fifties, Louise Bourgeois was primarily known in the art world as her husband’s arm candy. She came from a family of artisans—she was born in Paris in 1911 to parents who ran a tapestry gallery and restoration service. Her husband, Robert Goldwater, was an eminent American art historian. Bourgeois managed to secure solo and group shows for her paintings starting in her mid-thirties and later switched to sculpture as her chief medium, but she never achieved significant renown of her own despite her work being added to collections at the Museum of Modern Art and the Whitney.

That changed in 1966 when Bourgeois was 55. She was discovered in New York by Lucy Lippard, a key figure in the field of minimal and conceptual art. Lippard included Bourgeois’s work in an exhibition she organized at the Fischbach Gallery in New York, “Eccentric Abstraction,” and Bourgeois rose to prominence quickly thereafter. Perhaps the cultural changes in the sixties finally allowed an artist like Bourgeois to emerge. She used her own personal history—including her hatred of her philandering father and her experiences as a woman—to inform her work, much more so than any artist that had come before her. LA Times art critic Christopher Knight noted, “Bourgeois was the first modern artist to expose the emotional depth and power of domestic subject matter. Before her, male artists had only nibbled around the edges, and women just weren’t allowed.”

Bourgeois said of her art that it was “a form of psychoanalysis.” Her sculptures predominantly incorporate body parts and sexual imagery, often combining them to disturbing effect. One of her more well-known pieces is “Destruction of the Father,” created in 1974 when Bourgois was 63. The sculpture depicts body parts strewn on a table, the result of a dream in which a family tears the father apart at the dinner table and feasts on his body. A prominent feature in the sculpture are clusters of breast-like bulges, which Bourgeois would repeat in several of her pieces. 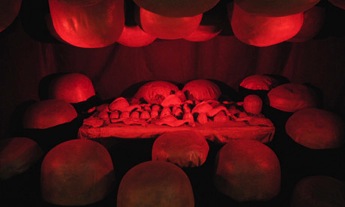 One such piece is a later work, “Maman.” It is among Bourgeois’s most recognizable sculptures. Created for the Tate Modern in London in 2000 (Bourgeois was 89 at the time), this giant steel spider is located outside the museum.  The viewer can see into the spider’s abdominal egg sac through mesh. Within the sac is a cell filled with antique tapestries, hollowed bones, and old Shalimar perfume bottles, among other items, which directly recall the memory of Bourgeois’s mother. Other Bourgeois spider sculptures exist, including one at Rockefeller Center in New York.

Bourgeois never stopped working and innovating. She died in 2010 at the age of 98. She lived and worked in a townhouse in the Chelsea neighborhood of New York City. It has been preserved as it was when she passed away.