(1996), didn’t come out until the author was 82. A longtime professor of English at California State Polytechnic University, Pomona, Adair had written poetry for many years, but was reluctant to publish any of it. She believed that it required “a sort of canniness that [she] didn’t really think went with poetry,” and added, “I was afraid of writing to please somebody else instead of myself.” When Ants was released, however—thanks to the help of Adair’s friend Robert Mezey, who sent a few of her poems to the New Yorker’s poetry editor, Alice Quinn—the enthusiastic response it received from critics like Susan Salter Reynolds was proof the poetry Adair wrote for herself pleased readers just fine.

Frederick Morgan. Though he’d worked with Allen Tate at Princeton, George Frederick Morgan first found literary success not as a poet but as a publisher—namely, one of three founders of the literary magazine The Hudson Review. And his formal debut, A Book of Change

, wouldn’t be published until 1972, when Morgan was 50. The poems in the book were the product of sad circumstances—the loss of his wife, Constance, which left him to raise their six children alone. Despite formal variations from one collection to the next, Morgan would return to the themes of Change: childhood, love, the certainty of death, and the necessity of affirming life in mortality’s face. “When you get old,” Morgan once told The New York Times’s Chris Hedges, “you should be able to rise above the conditions of mortality and laugh.” Indeed, as Emily Grosholz puts it, “one must have lived long, confronted and assimilated the inevitable tragedies of life, in order to write as [Morgan] does.”

(2001). Initially majoring in philosophy and considering a career in academia, he moved through several occupations—record company executive, government employee, bartender, and counselor, among others—before coming to poetry later in life after the unfortunate dissolution of his marriage. The transition is more natural than it might seem; poetry, as Stammers observes, “comes from a similar impulse to the study of philosophy and psychology; it’s all about wanting to know what’s going on.” And Stammers’s career path has produced a refreshingly grounded and all-encompassing poetics. As the Telegraph’s Cressida Connolly notes, “Is it possible to be a first-rate romantic poet and yet make mention of Ovaltine, Plexiglas, Rock Hudson, a macramé plant-holder, visiting the chiropodist and wiping dog-mess off a shoe? In the case of John Stammers, the answer is a resounding yes.” 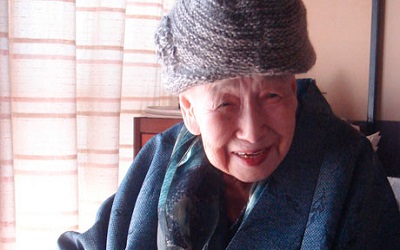 Toyo Shibata. At 92, debilitating back pain left Toyo Shibata unable to pursue classical Japanese dance, which she had taken up late in life to cope with the death of her second husband. Her son proposed poetry as a solution. Shibata took to the medium quickly, and a collection, Kujikenaide—“Don’t Lose Heart”—was published in 2009. Kujikenaide was a popular success for inspirational messages like those of the title poem (“I have seen hard times but I am glad that I am alive. / Don’t you ever lose heart, either”) as well as sweet and honest confessions, like the one she made in a poem later translated as “Secret”—that she had, at 98, “fallen in love” with a doctor who visited her at her home. Shibata followed Kujikenaide with Hyakusai [100 Years Old] in 2011, continuing in her inspirational mode with a message for those affected by that year’s terrible earthquake: “Please do not allow your soul / To also be swept away.” Shibata passed away peacefully in a nursing home in 2013 at the age of 101.

, came out in 2008, making it the most recent of the debuts on this list. Waldron was 48 at the time. As he tells fellow poet Julia Bird, he held off on publishing any of his poetry until he was “old enough to have shed some of youth’s self-consciousness.” And it seems this strategy was a successful one. Take the confident, magnanimous tone of “Make Use of My Poem in Any Way You Like”—which appears in Waldron’s second collection, 2011’s The Itchy Sea

, and exhorts readers to “Deconstruct” the poem, to “help yourself. // Take it apart piece by polished piece, to see how it works, / to watch the keen little engine spin, lit with innocent heat.” As Bird observes, Waldron believes “that poets write the poems they were born to, whatever age they start.” He also thinks of ideas as analogous to “balls in a pinball machine”—“when they’re used up, they’re used up”; and here, too, his age gives him an advantage. “I only started using mine at 41, so I’ve a fair few left.”