Many decades ago, as a graduate student studying the aging brain, the sum of what I learned filled little more than a couple of handwritten notebook pages.  At that time common knowledge and scientific acumen suggested that by age 30 the brain began its decline, a slippery slope in a fixed system, passively sloughing off dead brain cells.  The idea that a brain could continue neuronal production indefinitely would have been considered laughable. Similarly, the theories about adult development, a dead-end parallel to aging brain research, marked 50 years of age as the end of the line in psychosocial terms. In other words, since the average life span didn’t go much beyond 60 at that time, what would be the point of studying the 7th, 8th, and 9th decades?

Of course, as I was in my twenties at that time, these theories were mostly irrelevant to my personal life. Fast forward more than 40 years: as a psychologist and senior citizen, I revisited the burgeoning field of neuroscience with a great deal of personal curiosity along with some trepidation. But happily, scientific thinking had indeed evolved. Exactly how to keep the aging brain sharp for the duration of life, however, still isn’t a simple proposition.

Absorbing the current neuroscience literature led me to the conclusion that novelty, complexity, and problem solving were the essential triad of ingredients necessary for maintaining brain vigor. I was determined to identify those behaviors that would maximize my chances of activating these three elements in my own life. 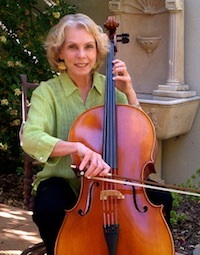 Learning a musical instrument at any age is purported to provide the kind of cognitive challenge I was looking for. That helped shape my decision to attempt to learn how to play the cello, my favorite instrument, with its deep, resonant, and dreamy sound. I thought I might write about it as a blog, article, or even a book. But generalizing the findings for one individual isn’t even remotely scientific and certainly couldn’t validate any hypotheses that might emerge.

Only after interviewing many late-blooming artists, who began their pursuits after age 55, did I conclude that brain health and vitality, and the expression of a fine art form, were inextricably connected. Just how this happens formed the basis for my new book The Vintage Years: Finding Your Inner Artist (Writer, Musician, Visual Artist) After Sixty.

The numerous psycho-social benefits of taking up any fine arts form, including, for example, memoir writing, playing a musical instrument, or painting landscapes, lead to:

In addition to heightened life satisfaction, there are a number of changes that take place in the brain and endocrine system beginning in the third trimester of life. While I anticipated that finding one’s inner artist would boost brain sharpness, I was delightfully surprised to find that the following changes actually facilitate the new but older artist’s attempts to learn, while improving their creative expression. The mechanisms through which these positive outcomes take place include:

1)     Bilaterality: During youth and adulthood, the hallmark of the brain’s left hemisphere is its ability to process linear, logical, and sequential information. The right hemisphere is involved in emotional regulation, imagination, and the processing of visual images. Novelty is mostly dealt with in the right hemisphere, but once a problem is understood or solved, the left hemisphere becomes engaged and is the site from which it is retrieved as a learned pattern.

Starting at midlife, the right and left hemispheres of the brain become increasingly integrated, more interdependent, and functionally intertwined. The right hemisphere becomes less effective in learning and holding new information, a normal and natural consequence of aging— causing age-related forgetting that we commonly refer to as “senior moments.” The left hemisphere compensates with its rich patterning ability. At this point, both sides of the brain may be used to perform a task—and two sides are superior to one! Also, thoughts and feelings are now better united than at any previous life stage as the hemispheres work in tandem.

2)     Patterning: This describes a shorthand process that is most robust in the later years.  Patterning allows a huge number of learned ideas to come together in new combinations. This may account for enhanced creativity in the later years, due to the ability to draw upon a vast storehouse of lifelong learning to be expressed in unique, fresh, and complex ways.

In reviewing the histories of famous performing artists, composers, painters, and writers I found just that.  The richness and depth that characterized the work done later in their lives was informed by the wisdom that comes with age and experience.

According to Elkhonon Goldberg, author of The Wisdom Paradox, who discusses the right-to-left-hemisphere shift as we age, “The left hemisphere is of foremost importance in mature years, the season of wisdom, of seeing new things through the prism of vast past experience,” and the left hemisphere “accumulates an ever-increasing ‘library’ of efficient pattern-recognition devices in the form of neural attractors” (p. 214).

3)     Hormones: In the years between 50 and 60 there is a decrease in estrogen and testosterone production. In both men and women, the biologically-driven urges of competition and emotionally-driven decision making and judgments give way to greater emotional stability, calmness, and increased focus of attention. This change results in greater patience and an increased tolerance for frustration, significantly benefitting the study of fine arts, especially as an older-adult beginner!

4)     Neuroplasticity: This describes, and is responsible for, the formation of new neurons and their connectivity to one another. Contrary to what was believed until recently, the production of neurons doesn’t routinely stop occurring at any particular age. However, the older brain requires certain kinds of activities to stimulate it sufficiently. The brain is capable of positive change throughout life, but as we age, it depends to an even greater degree on being involved in activities that optimally stimulate the triad mentioned earlier: novelty, complexity, and problem solving. While some of my friends report that playing bridge, working in their gardens, and doing crafts like woodworking or quilting are good examples of behaviors that stimulate brain activity, I’m convinced that the fine arts are still more effective, since they tap into very primitive urges that ensure survival of the species, identified by evolutionary psychology and detailed below.

5)     Evolutionary Psychology: This is a relatively new field of study in which scientists study brain development in evolutionary terms. They investigate how and why cognitive functioning evolved from the beginning of humanoid time. It turns out that how we see and experience the world are products of an evolutionary process spanning more than one hundred thousand years.

In the beginning of human time, the arts bound together the past, the future, the everyday, the unknown world of the spirit, while the oldest members of the clan passed down their wisdom through stories, cave drawings, and music. That was art’s survival value, and as the evolutionary psy­chologists might say, that is why the arts and our attunement to them were selected as traits to become hardwired genetically. The arts made sense out of our existence as well as offering an emotional outlet for our joys, pain, suffering, and unanswerable questions.

Brain and psychological functioning beyond age 60 is quite a complex subject after all. As described in much more detail in The Vintage Years, our knowledge and understanding of the above-mentioned neuropsychological factors has been greatly enhanced by recent research. In addition, there are other important influences, also emphasized in the book, that are an essential part of the “sharp for life” routine.

It is no accident that I am a student of the healthy brain, psyche, and body. It was a very conscious choice after more than 45 years of working with the psychopathology and unhappiness presented by my psychotherapy clients. But it would be irresponsible for me to suggest that taking up the fine arts will overcome a disease process such as dementia or Alzheimer’s. Still, there is compelling research to suggest that writing a memoir, playing a musical instrument, or sculpting clay, by way of examples, are still possible even with some deterioration in brain structure/function or memory loss. Procedural memories, those that have to do with learning a skill, tend to be the most resilient. In fact, recent scientific findings confirms that music, whether listened to or played, has a soothing effect even on those people with significant brain impairment.

Just keep in mind that aging is not a disease and that cognitive decline isn’t inevitable. Live your life as if there were no tomorrow. When you ask yourself, “if not now, when?” recall that now could span decades.

Click here to read an excerpt from Francine Toder’s The Vintage Years.

Francine Toder, Ph.D., is the author of The Vintage Years: Finding Your Inner Artist (Writer, Musician, Visual Artist) After Sixty (2013). She is an emeritus faculty member at California State University Sacramento and a clinical psychologist recently retired from private practice. Toder is also the author of When Your Child Is Gone: Learning to Live Again and, Your Kids Are Grown: Moving On With and Without Them. She resides in the San Francisco Bay Area and practices the cello daily. You can contact her at francine@docToder.com or find her on Twitter @DocToder.

5 thoughts on “The Vintage Years: How the Older Brain Both Facilitates and Benefits from Fine Arts Expression”