I backed into writing late, deciding at age 35 to apply to Ohio State’s MFA Program. Like many people on the downslope to 40, I’d found myself stuck in a career crisis, working all day at a job I hated (researching medical equipment) in order to afford nights and weekends spent doing what I loved (playing in a rock band).  A graduate diploma in creative writing, I hoped, would lead to a more tolerable nine-to-five gig. But I knew my application was like a desperate Hail Mary pass. The odds of me getting in seemed perilously close to zero, not because I was old but because I hadn’t yet written anything. I’d done term papers as a Political Science undergrad, of course, a degree that had taken me fourteen years to complete, and I’d spat-out a few half-assed journal entries. I’d written songs, too. A whole bunch of songs. But no stories. No poems. No personal essays, either—which was a problem, since I was applying to OSU to study creative nonfiction, and until a month or so before I began the application process, I hadn’t written a single piece of nonfiction that could even remotely be called creative.

I did have one thing going for me: I had life experience. Which is to say, I had material. I’d spent the previous 20 years playing bass and singing in Watershed, the band my high school buddies and I started the summer we turned 15. We stayed together post-graduation and through three years of college, and then, just before our senior year, we quit school to hit the road full time. We were exactly young enough and naïve enough to be convinced we’d score a fat record contract. And after three years of playing everywhere from Boston to Austin and building a nice following in our hometown of Columbus—well, we did.

Epic Records signed Watershed to a six-figure deal, and we moved to New York to start work on our major-label debut. This was the big leagues. Our manager also represented The Fugees. Our A&R man was the guy who’d signed the platinum-selling Spin Doctors. Jim Steinman, the songwriter behind Meat Loaf, was producing our album, and the lead single from that record soon caught fire on Chicago’s top-rated rock station, which led to more radio adds across the Midwest. We drew a crowd of 10,000 to a show in Columbus, and the Epic Records brass hinted that the label would be sending us out on a summer tour of radio station festivals. We were 25 and on the launch pad to rock stardom. 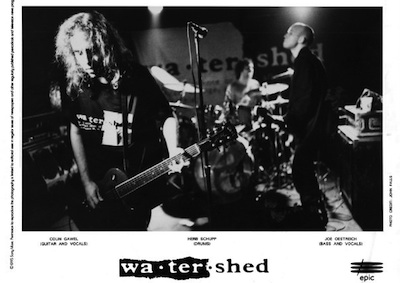 I’ll just go ahead now and state the obvious: rock stardom didn’t happen. The reasons are many and complex, but I’ll boil them down to one: The promotional resources of even a huge label like Epic (a division of the Sony mega-corporation) are finite. Just as momentum was building for Watershed inside the Epic machine, label reps started showing up at our gigs asking if we’d heard about their newest signing, Silverchair, a group of teenagers from Australia. We hadn’t—not at first, anyway—and when we told the reps as much, they always, and I mean always, said, “Those guys are really good…for 16 year-olds.” This qualification (“for 16 year-olds”) infuriated us. Watershed had already been together for ten years. The summer we’d formed the band, those Australian whippersnappers were still being carried in their mamas’ kangaroo pouches, but it’s not like we were old, even by the music industry’s skewed standards. Besides, the success of our single in Chicago was proof that our songs were viable regardless of our age.

No matter. When the Epic execs met to decide which band to put on the radio festival tour, they chose Silverchair. Then they dropped us from the label. Our big-shot manager, now busy representing Joan Osborne and Spacehog, called to tell us we’d had a nice run, but it was over.

If you had asked me at the time, I would have said that choosing 16 year-olds over 25 year-olds was another in a long line of examples of our culture’s obsession with youth. But now—at 43, a more appropriate age from which to gripe about how we favor the young—I’m not entirely sure we are youth-obsessed. Instead we seem to be intoxicated by potential and its riskier sidekick, upside.

The words potential and upside are almost, but not quite, synonymous. Both deal in possibility. Both are a bet on the future. But potential is the safer play, one that treats past performance as a predictor of future success. Upside, because it hints at its opposite, downside, is the high-risk proposition—longer odds but a richer payoff. You’ll see this dynamic at work during this month’s NCAA basketball tournament, when talk inevitably turns to which players have the talent and skill to make the leap to the NBA. Many athletes—especially the freshmen who are projected to leave college after one year, the “one-and-dones”—will be described in terms of their upside. Come draft day, the conservative pick will be the seasoned college star, the known-quantity, the one with mappable potential. But, oh, how teams will be tempted to go all-in on the raw-but-freakishly-gifted freshman, the bigger gamble with the unlimited upside.

Our addiction to upside is no surprise. We Americans put much more stock in the future than in the past, and we value the unknown (or still-to-be-learned) over the known. Upside is speculation, and we are mightily charmed by speculation. The history of our country, from settlement to westward expansion, is one giant land speculation deal. Migrating from the safe known to the risky unknown. The American Revolution had upside. Manifest Destiny, for all its violent Euro-centric jingoism, had upside.

So the appeal of the young doesn’t lie in the smaller number of years they’ve lived; it lies in the larger number of years they’ve yet to live. Sixteen year olds simply have more future than 25 year olds, more years to wager on, more unsettled potential on which to project our hopes and expectations. Privileging the young allows us to live vicariously through those whose futures are longer than ours. We co-opt the years we won’t be alive to see—not because we want to live forever but because living here-and-now is too painful unless we believe there’s a future we can shape and envision. Consider heaven: another sort of speculation deal, property development of the clouds.

Looking back now, it’s clear to me that Watershed had potential, but Silverchair had upside. Epic Records bet on the kids and won. The Aussies’ major-label debut sold over 2.5 million records worldwide. The 20-somethings from Columbus sold south of 10,000. When I listen now to the album we recorded back then, I hear in each song a good, but not fully formed, idea. We hadn’t done enough living, so we didn’t have much to say. Silverchair didn’t have a lot to say either, but they didn’t need to say anything. Their youth—and by extension, their upside—spoke for them.

Ten years after being dropped from the label, I applied for that spot in Ohio State’s MFA Program. I knew I was a risky bet. Raw and unproven. Sealing the envelope with a draft of a first fledgling essay inside, I crossed my fingers that the admissions committee would judge me—an aspiring writer who’d barely begun to write—in terms of my upside. If they weren’t exactly sold on the little writing I’d done, I hoped they’d be enamored with the writing I would one day do.

OSU hedged at first, sliding me onto the waitlist, but I eventually got in, the last one through the door. At 37 I graduated with my MFA. At 42, I published my first book, Hitless Wonder: A Life in Minor League Rock and Roll

, a memoir of the 20-plus years I’ve played in Watershed (the band is still together, by the way). If there’s a downside to being a debut author in my forties, it’s that I have a shorter writing future than I would have if I were younger. Strictly speaking, I may not have upside, but I’m betting I have a much deeper well of experience to draw from.

Joe Oestreich is the author of Hitless Wonder: A Life in Minor League Rock and Roll. He teaches at Coastal Carolina University in Conway, SC, where he co-edits the journal, Waccamaw (www.waccamawjournal.com). He can be found online at www.joeoestreich.com.