The 19th century saw a surge in the number of women writers. One impetus that women had for taking up writing was money: while facing financial setbacks, Victorian women readily turned to writing popular novels as a means to support themselves and their families. Profiled below are five Victorian authoresses who were also Bloomers. 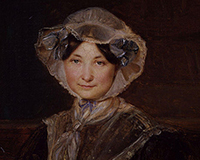 In 1832 at the age of 52, Frances Trollope launched her career as a writer in order to pay off her husband’s debts and support her family. Based on her sojourn in America from 1827 to 1830, Domestic Manners of the Americans was a scathing account of America and Americans, and an instant hit in Britain. In 1836, with one of her earliest novels, The Life and Adventures of Jonathan Jefferson Whitlaw, she addressed the issue of slavery—16 years before Harriet Beecher Stowe. While her son Anthony Trollope went on to become much more well-known, Frances Trollope wrote more than 40 works, including travelogues, books that tackled the social issues of the age like The Vicar of Wrexhill, and The Life and Adventures of Michael Armstrong: The Factory Boy, one of the first industrial novels.

A fan of Jane Austen, Emily Eden was raised in a wealthy and politically active family. Though she appears to have remained unmarried, her two novels, The Semi-attached Couple and The Semi-detached House, both published in 1860 when Eden was 63, dealt with the ‘happily-ever-after’ phase of a relationship. Emily Eden was “Taking Up Where Jane Austen Left Off,” as the New York Times put it. A prodigious letter-writer, Eden also published her accounts of India in 1867 as Up the Country: Letters Written to Her Sister from the Upper Provinces of India—in the words of William Dalrymple, “one of the most waspish, witty and widely read accounts of Indian travels ever penned, and produced some of the most popular images of the period.”

Born in Britain but settled in America, Amelia Edith Huddleston Barr was a voracious reader while growing up. She turned to writing at the age of 38 after losing her husband to yellow fever. Barr found her niche in historical romances, publishing her first book, Romances and Realities: Tales of Truth and Fancy, in 1875 at the age of 44. She was a prolific and financially successful writer of serialized novels, articles, and poems for numerous prominent publications of the day, including Harper’s Magazine and the London-based Sunday Magazine. In her own words, “Literature is no accident. She is a mistress who demands the whole heart, the whole intellect and the whole time of a devotee.”

In 1860, at the age of 46, Mrs. Henry Wood embarked on her journey as a writer by winning a story-writing competition. She turned to writing in response to the financial setbacks suffered by her husband. In 1861 she began to serialize East Lynne, her most well-known novel. Mystery, melodrama, romance, and the supernatural were staples of Mrs. Henry Wood’s stories, and they garnered a mass readership. She haggled over the profits with her publishers and insisted on retaining the copyrights to her works. Deemed “the originator and chief of the sensation school of English novelists” in 1864, Mrs. Henry Wood wrote copiously and, in 1867, took over the editorship of the highly successful magazine The Argosy, a role in which she continued until her death 20 years later. 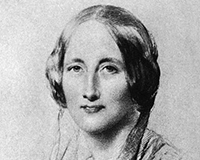 Elizabeth Gaskell once advised a young authoress, “When you are forty, and if you have a gift for being an authoress, you will write ten times as good a novel as you could do now, just because you will have gone through so much more of the interests of a wife and mother.” She published her first novel Mary Barton (1848) at the age of 38, encouraged by her husband to write as a means of coping with her son’s death. Instant acclaim from the leading literary luminaries of the times such as Dickens and Carlyle followed the publication. Her most famous work, North and South, published in 1855, dealt with the conflicts created by industrialization, a theme that recurred in Gaskell’s stories.