I suspect I came to writing the way most writers do: I read book after book from an early age and found worlds in literature that were richer, more moving, funnier, and more beautiful than the world of my daily life. Dickens astonished me; J.D. Salinger seemed to be reading my mind just as I was finding out I had a mind; Hemingway made writing simple enough for me to try it myself; Faulkner taught me things about the American experience I hadn’t learned growing up near Philadelphia.

The biggest change in my life occurred when I received a scholarship to attend The Hill School, a prestigious prep school, as a boarding student. I was thirteen. Neither of my parents had graduated from high school, but my brother also had been a scholarship student at The Hill School and done well, so I used my insecurities about not being a rich kid at a rich kids’ school to fuel my exploration of everything the school had to offer. The core of my education revolved around five years of Latin and three of Greek. I read Caesar, Cicero, Vergil, Tacitus, Catullus, Plato, Herodotus, and Homer. In these and other classical authors I encountered a fundamental fact: literature is a continuous human endeavor, not bound by time or place. At The Hill School I also read Melville, Crane, Twain, Conrad, Joyce, Kafka, and Shakespeare…every term, more Shakespeare…every year, more Shakespeare.

And I began to write because I had to write—our English teachers assigned an essay a week for five years—and needed and loved to write.

And The Hill School brought in writers to speak to the students: W.H. Auden, James Dickey, and Richard Wilbur, to name just three.

So I would become—was becoming—a writer. I won prizes and recognition and had my stories published in scholastic publications and kept going fast at Princeton (again, following my brother). I read Tolstoy, Proust, Mann, Dostoevsky, Flannery O’Connor, and Bellow. After The Hill School, I didn’t need much teaching, though I valued certain professors a great deal: Geoffrey Wolff and Edmund Keeley in creative writing workshops; A. Walton Litz in courses on criticism and modernism; Will Howarth on the 20th century American novel.

I spent the middle part of my twenties doing different things—editing, bar tending, teaching—to finance my writing and to learn how to make bigger and bigger mistakes with my massive Olympia typewriter. Ambition demands enabling skill; skill is born of failure, no two ways around it. For reasons that remain unclear to me, I declined acceptance from the writing program in Iowa, but a year or so later, I was offered a full scholarship by The Writing Seminars at Johns Hopkins, where John Barth was the most prominent faculty author. Barth fascinated me. He was sunny, he was subtle, he was acute, and he was an endlessly inventive writer.

As it happened, the first week of the fall semester, the Foreign Service accepted my application for employment if I’d come to Washington right away. I asked if they’d take me after I finished the Hopkins program. They said they probably would. Barth said something memorable soon thereafter: none of you, talented as you are, should expect to make a living by just writing fiction, for at least ten years…and maybe longer…maybe never… 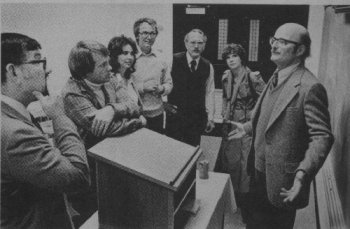 So I postponed the Foreign Service and stayed at Johns Hopkins. I had a spectacular year there. My writing took new forms and directions as I worked with Barth, an excellent critic/editor Charles Newman (who founded TriQuarterly), Edmund White, and John Irwin. But I had the feeling that the direction my fellow graduate students were taking—into the close-knit academic world of teaching writing and literature—wouldn’t be right for me: too self-absorbed, too hermetic. So I decided, yes, I’d go into the Foreign Service after Johns Hopkins, keep writing while exploring the world, and after five years resign and return to my basic plan: write full-time.

It didn’t work that way. First, the Foreign Service was demanding. Second, I was an unusually successful Foreign Service Officer. Third, my success led to one fascinating job after another. Fourth, my wife and I had two children, and soon I could see how this would play out: stay in the Foreign Service until age fifty, take early retirement…and then the plan: write full-time.

I did publish some writing as a Foreign Service Officer. But it wasn’t until my forties—and I’m thinking of a Saturday morning in Bonn when I was sitting in my study overlooking the Rhine—that I began to feel some resolution of my dual self, both writer and diplomat. I was working on a story about my father, who had just died, and I knew I could let myself fall into it as I’d always wanted to…as I’d fallen into Dickens and the rest.

I co-edited a book on the social and cultural dimensions of North American interdependence with an historian at Stanford during that period and began picking up the pace in my short story writing, knowing I’d get to fifty pretty fast. Helped by two stints as diplomat-in-residence (at the University of New Mexico and Georgetown University), I wrote more and more. Fifty came, and I left the Foreign Service.

In truth, that’s when John Barth’s ten years started ticking for me: I published a novel, The Way Home

; I began to publish stories with greater frequency; then, in the middle of a huge historical novel, The Man Clothed in Linen

, I was asked to return to the Foreign Service to help find a way out of the disaster created by America’s invasion of Iraq. That was both a setback and a stimulus to my writing. I wrote a nonfiction book about my time in Iraq, Nights in the Pink Motel, that took the form of an episodic novel. Then I returned The Man Clothed in Linen, which came out in 2011. All along I was publishing stories, my first love. This led to a sixteen-story cycle that takes The Brothers Karamazov into 20th century America and offers a view of the next three Karamazov generations. Many of these stories, one of them a novella, are now in print.

I saw John Barth a few years ago and mentioned reading a comment to the effect that the novel he had just published would be his last. Barth laughed. “I’m sure some of my critics wish that were so, but it’s not.” He was in his eighties. He’d had his plan since his twenties, had early success, and then more success. I don’t think he ever experienced the tough ten years he predicted for the rest of us, but he was right.

Writing literary fiction is a solitary endeavor that offers the most satisfaction when you’re doing it. Generally speaking, there’s no money it. So I used to joke that at fifty, my annuity would constitute a lifetime Guggenheim award to take care of my family and me as I dropped out of foreign affairs and entered the world of writing, just writing. That’s more or less how it has worked, but it’s been hard. The Man Clothed in Linen was very hard. I wrote Nights in the Pink Motel between 5:30 and 7:30 in the morning as I stayed on in the Foreign Service for a few years after Iraq.

Now I have four books to my credit, dozens of short stories, and a healthy audience for the reviews I publish on Redroom.com and Goodreads.com.

Looking back, I think it takes years to get “work” out of your head once you “retire” to write. If you do something for decades that commitment becomes ingrained in your thought process to such an extent that you don’t even know it. So you have to let it bleed away, and that’s a bit painful. It’s also a bit painful to return full-throttle to writing and pay your dues in your fifties and sixties. Almost no one knows you, and the people you met when you were young don’t remember you; you’ve got some catching up to do. But I’m glad that, at sixty-one, I’m not burned out with writing and reading. That puts me in a good place to be, in life-cycle terms. I think my strategy will be just like John Barth’s. Write until I can’t do anything else…write until the end. It’s a good way to go.

Robert Earle’s short stories have appeared in dozens of literary magazines, both print and online. This fall The Piker Press serialized his novella, “Thank You, No. We’re Well.”  His most recent novel is The Man Clothed in Linen

4 thoughts on “Experience Required: A Good Place to Be”